Zen and the Art of the School-Run 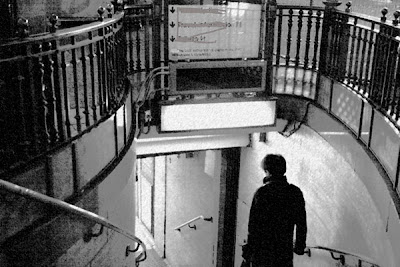 OK, so your wife is in bed, knees up to her throat, first day of her period and there is no way she’s moving, unless it’s to grab a razor and cut her throat.

You droop downstairs, put on a brave face, say, “Good Morning Camp-airs!” to the kids in an excruciating Welsh accent, flick the kettle on, throw some bread in the toaster.

Now you grunt at T-J, is his school-stuff ready, where does his Mum put the lunch-boxes, does he have his homework, where are the car keys, WHERE’S THE DOG? Then Sweetness, your little girl comes in, smiles.

You turn to the toast. Behind your back you half-hear, “Arsehole!” from little Sweetness and “Git-face,” back from TJ. You decide it’s best you didn’t hear because they’ll deny they spoke, you’ll get angry (you hate lies) and you’ll lose it, and your head will be fucked up until lunch-time.

At ten-past eight you deliver a cup of Earl Gray to your wife who is now ready to lash out. You should be gone. You didn’t need to bring her tea. They get into trouble if they’re late. (If you hadn’t brought tea…) You bite back your answer, because if you answer, she answers and your head will be fucked until lunch-time. Or just after.

You get in the Land-Rover. Today is one of those days when you think, “Who the fuck’s idea was it to go back to nature and live in a shit-hole in the back of nowhere where it takes fifteen minutes just to get INTO the school-run. You hear the moans now. ”Forty minutes EACH WAY. Forty minutes twice a day, every fucking day. Four hundred minutes A WEEK. That’s sixteen THOUSAND minutes a year, two hundred and sixty seven hours, that’s SEVEN FUCKING WORKING WEEKS. You could write a fucking novel in seven fucking working weeks.”

You try not to think these things, because if you do you know your head will be fucked up until lunch-time. Or later. But now you have, and you’re done. TJ has put something on Sweetie’s head and she’s calling him bastard-bastard-bastard. Even you can’t ignore this. Even you can’t pretend she never said it. So you deal with it. “TJ LEAVE YER BLOODY SISTER ALONE!”

And now you KNOW you’re completely fucked for the day, so you decide to go to the gym, then come back via Tescos.

Now, after bouncing down a joke sometimes also called a track, then lurching and sliding onto another joke (known as “unadopted road”) then crunching onto the joke formerly known as “country road” you hit the line of People-Movers full of kids in red.

But you try not to think these things, because if you do you your head will be fucked up until lunch-time. And beyond the one o’clock news. And Neighbours. Now you just vaguely hope that an hour and a half in the gym will help, and maybe, somewhere, around two o'clock, you’ll squeeze in an hour’s editing.

You see a gap, hang a dangerous left, slap across a refuse dump, doing forty, (thinking you're Michael Caine in The Italian Job with the kids bouncing in their belts, but TJ loving it.) You gain three minutes. Some jobs-worth with a sweaty arse rushes out of a wooden hut to shake a fist at you and you barp the horn and show him the finger out the window.
As the kids get out, Sweetness is threatening to “tell Mummy” because Daddy isn’t supposed to go across the tip. TJ calls her a bastard dobber and she calls him a fucking wanker.

They’ve left you a rowing machine.

But you row, because all they have left you is the fucking rower!

On the way home, you dutifully go via Tescos.  Some Earl Grey, two six-packs of yoghurts but no Black Cherry, a loaf of bread and some Feminax.

And then you see them: a stack of fucking J K Rowlings, six foot high, six foot wide, six foot fucking deep.  In this one Tescos, just today, they’ll probably sell as many books as you’ve sold in five years.

OK, maybe you shouldn’t, and it’ll mean the wife will have to get the kids in the afternoon, but oh, fucking hell is it worth it.

You whip out your dick, stand there, and piss.

The charges. Criminal damage, indecent exposure, causing a breach of the peace (at least) but then you’re thinking, a smack off a couple of the security guards, arrest, a cell, a court-case, (but it’s all material), and afterwards, well maybe a little publicity, and perhaps you can get a deal for a self-help book.

Either way it’s worth it. It’s a relief.