OK, so there's this wrecked caravan... 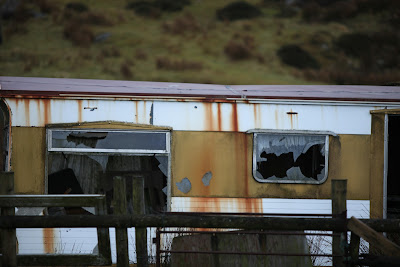 Great show would "peg" the caravan in one fabulous "poetic" sentence that DIDN'T fully describe the caravan, but somehow, by an allusion or metaphor or some other method, maybe to do with the voice and attitude of the "statement" allows the reader to imagine a clapped out rusty wreck of a caravan, the READER's own self-generated wreck.

Even the ordinary "a clapped out rusty wreck of a caravan" is better than what follows, because what follows becomes longer and longer-winded, ever more dull and pushes the reader's own ideas further and further away

Now the mistaken view of show is to "be scenic"

Looking at the picture, we might say "It was a disused caravan" and that feels "DEAD" right?

Or we say "Out on the moors we came across a caravan. It was deserted, disused and we surmised that the farmer who had owned it was long gone, probably dead."

That too is flat, unpretty, dull and very telly.

Then along comes the "I know what show is" "guru."

S/he says, no, no, Alex, describe it to me, give me the DETAILS, make me SEE it. Don't TELL ME it's disused etc.

(Because a pen picture is show, right?)

So maybe we say:

It was an old, rusty caravan.

Yeah, Alex I can nearly see it. Give me more.

It was an old, rusty caravan with broken windows.

Yeah, Alex I can nearly see it. Give me even more.

It was an old, rusty caravan with broken windows and a door hanging off its hinges.

OK, Alex. Closer.  I can nearly see it now. But I want more.

We found it out on the moor, an old, dirty caravan with broken windows and a door hanging off its hinges, the once white paint-work stained with rust where rain had run.

We found the shabby, sad, neglected caravan out on the cold, gloomy Welsh moor. It was dirty, with broken windows, riddled with holes and the door was hanging off its hinges, the once white paint-work stained with rust where rain had run. Broken glass covered the floor.

We found the sad, shabby, neglected, ancient residential caravan out on the cold, gloomy wet Welsh moor where now only the sheep seemed happy. Once it had been two-tone, a gold with two white stripes. Now it was dirty - filthy - with every window broken, dangerous shards of glass lingering, the aluminium riddled with holes and the door hanging off its hinges, and creaking eerily in the wind coming off the sea. The once white paintwork was stained brown with rust where rain had run from the sagging roof. Broken glass covered the floor, sheep-shit was everywhere interspersed with scags of grey, stinking wool torn from the lonely sheep.

The more description we add the less the reader has to think. It's when the reader has to respond to words and react to create an image that we get reciprocity between author and reader and "buzz" in the words.

Note, BTW, that I find it hard to write really bad, unmusical sentences and the above (me TRYING to write flat) still has some "sail" and musicality.)

Commonly such descriptions from beginning writers have zero music and are just dull lists of adjectives.

The trick is to create an image NOT on the page to be merely "parsed" by a docile reader but in the reader's head, evoked, requiring the cooperation of the reader for a full understanding.

I didn't sleep last night and am "flat as a fart" so a good genuine-show line won't come to me.

Where's Raymond Chandler when you need him?

It was a gold and white shite-bucket of caravan stinking of sheep-shit and creaking like the Mary Celeste.