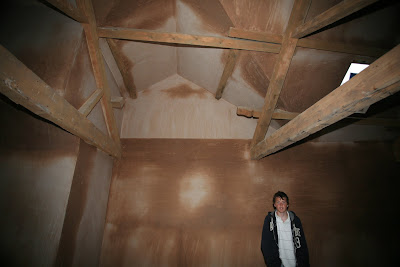 
I like the new-look blog - it is fun, and useful.

(Alex) Feedback for you on 'openings'...

Three or so years ago I had a lot of words done for the novel. I had a voice. And a mishmash of stuff, themes swirling about. Nothing really clear. A main character who I didnt know really - didnt know 'why' I was writing him. Just following my nose.

I had to take my car for a service. Big deal. So, Im waiting in the ghastly customer waiting area with a plastic coffee. Daily Mush to read. Not thinking about the novel. Frightened of it.

A propos of nothing, this line came into my head, there, in the garage. "My name is Ianto Jenkins. I am a coward." I wrote it down on the Daily Mush and tore off a bit of the front page, not to forget it.

Bingo. That was the first line of the novel - and the whole grew out of it, shaped itself, the themes made sense, and 'he' made sense.

But I also knew - the line had come from somewhere. It was 'right' but ...where had it come from?

I use your prompts a lot. I searched the blog.

"My name is Eddie. I am a coward." I never used it until c. three years later... but it stuck in there somewhere.