We managed to squeeze two flash sessions out of the Boot Campers today, plus had two visitors, one from someone on sabbatical and one from a writer who shared in the Children-in-Need experience. That liitle bit of fun takes us to a really healthy 21 Flashes and 4 stories, a sort of bonus as we roll into 2006. 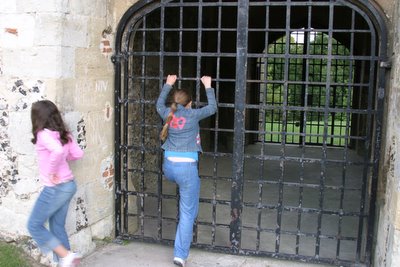 The Door to Boot Camp

My grown son visited briefly over Xmas. One of the things he pointed out to me was a "trailer" for a film called "Shining." This is one of a series of spoofs. A trailer made from the original Jack Nicholson film (The Shining) but completely changing the sense of it into a feel-good family drama!

There's a great one (somewhere) of "The Sound of Music" (as Children of the Damned), another of "West Side Story" (Zombie Film), and another turns "The Parent Trap" into a film about a first lesbian experience.

These are loads of fun but IMO very meaningful to writers: (Discuss!)

One of the excellent bonuses of scientific advancement is the extra stuff on DVD ABOUT film, about the making, the writing, and so on. On the latest edition of Gladiator there's a valuable lesson in how the film was re-themed turning it from a good B-Movie into a top-drawer piece.

I won't mention the actualities of the re-theming, (go look) but suffice to say we use this on Boot Camp courses as a great example of how a theme can thread through a story and give it strength and resonance.

Have a good night!

"These are loads of fun but IMO very meaningful to writers: (Discuss!)"

give us a clue then, just for the thick, what is it about these parodies that applies to writers?

Have you WATCHED them, Lee?

Sort of spoils the discussion if you haven't.

Then you tell me?

The Shining is brilliant. I wasn't so impressed with Titanic, perhaps because it wasn't such a huge switch of genre. It's exactly what people do on the internet all the time, picking selectively from what someone says and twisting the meaning by leaving things unsaid. It'd be interesting to do it to a novel or a short.